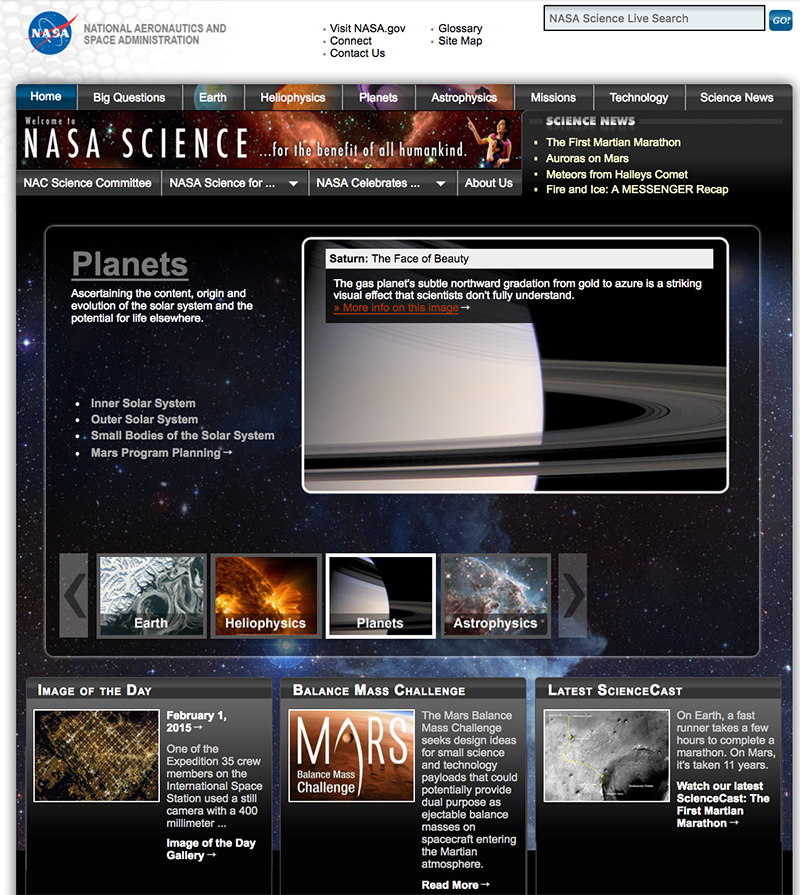 Thanks so much!!! This is an amazing site. ...I'm still doing the "happy dance." ...you produced a very, very superior product." — NASA SMD Executive Officer for Information Technologies

It is a beautiful web site! I clicked down to the lowest levels in the various science and mission areas that I am involved in and found it complete and accurate. Very nice work ...." — NASA Web Federation Member

Wow! I'm liking it! From the looks of things, the new NASA Science web site looks fabulous and, I think, upstages the .nasa.gov web site. I think I would base my affinity site on the SMD web site than the .nasa.gov site. Congrats to you and the SMD web team on developing something that all of the us working on the science side of things can be proud of." — NASA Web Federation Member

The NASAScience.NASA.gov website was manually maintained and hard to update. NASA's Science Mission Directorate (SMD) wanted a new site that was easy to update by multiple non-technical users. It needed a modern look-and-feel and required a migration of all the existing content.

V! Studios staff worked with SMD and other contractors to develop an information architecture including how NASA's Big Questions were addressed by Missions and how various content types should be interlinked. Developers built a content management system based on the open source Plone CMS. We wrote tools to extract, transform and load content from the existing static site into the new CMS, and submitted it for review by subject matter experts and SMD stakeholders. V! engineers ran the application on multiple servers fronted with a cache engine to handle load. When it became time for the web site to be refreshed, it was re-built as Science.NASA.gov using the Django platform and designed a fault-tolerant system architecture to ensure no single point of failure; it included cache engines, application servers, and replicated databases. When NASA launched its WESTPrime cloud environment, V! Studios engineers moved this architecture to the AWS cloud, making it the first NASA site to go live in WESTPrime.

Upon initial release the site was deluged and praised by tech-savvy readers of Slashdot, Reddit and others, and the site load was further taxed upon conventional media coverage. The site handled all load spikes gracefully, and also weathered server outages in the third-party vendor's datacenter without interrupting the public's access. After V! Studios migrated the site into NASA's WESTPrime, it got a further performance boost from AWS's content distribution network.