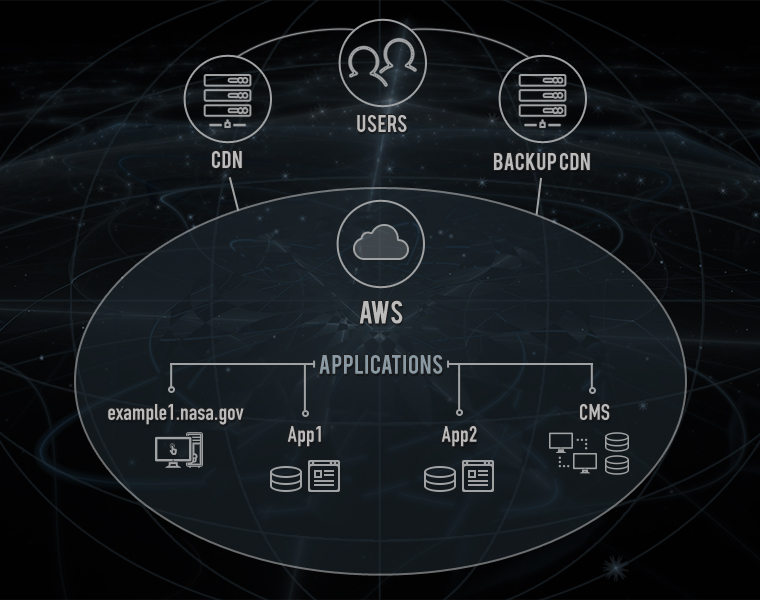 This is an unprecedented transition where most projects of this magnitude would take up to 7-9 months. NASA's flagship portal can see traffic for live streaming of over 1M/mbps with a volume of over 1000 TB in a 48 hour period and for web site traffic of about 100K requests/sec to deliver data at 13K/mbps with a volume of about 70 TB in a 48 hour period. These numbers rival many commercial websites such as CNN and other government high traffic sites such as NOAA." — Citation from NASA Group Achievement Award: "Taking NASA into the Cloud"

Under NASA's I3P program, The Web Enterprise Service Technology (WESTPrime) contract was initiated to establish a Platform as a Service for NASA in order to easily host applications and services in the cloud. NASA needed a cloud-savvy IT services organization to establish a new managed cloud environment (MCE), provide migration services from a legacy datacenter, work with application owners for user acceptance testing, and stabilize operations after the migration.

Within the first five months of the contract, V! Studios established all the cloud environments and completed the migration of NASA's catalog of applications, services, and systems hosted on their legacy infrastructure into Amazon Web Services, creating an agency-wide cloud offering. Migration services included establishing the NASA cloud network infrastructure to include IP space and virtual private clouds (VPCs), building the infrastructure for www.nasa.gov, and porting legacy systems into newly created WESTPrime cloud instances. Additionally, V! Studios successfully transitioned all NASA Television video streams onto a new content delivery network (CDN), as well as migrated over 8000 videos from a proprietary platform to YouTube.

As the significant subcontractor on WESTPrime, V! Studios was tasked with and succeeded in:

As a result of V! Studios migration and stabilizing efforts, NASA was able to provide a fully functioning managed cloud environment to the entire Agency in less than half a year. In addition to drastic cost reduction, the agency was able reduce complexity while providing NASA with state of the art technical solution.